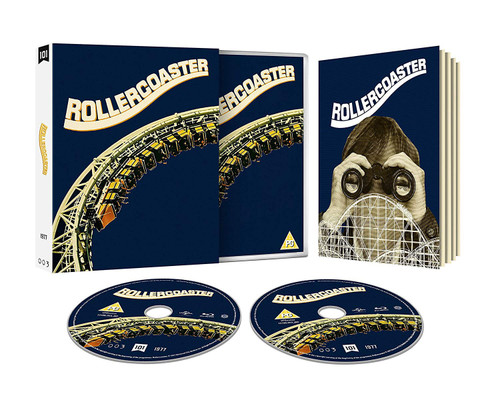 101 Films presents an unforgettable trip filled with sense-shattering twists and hairpin turns in Rollercoaster, starring Timothy Bottoms (The Last Picture Show), George Segal (Who s Afraid of Virginia Woolf?), Richard Widmark (Kiss of Death) and Henry Fonda (12 Angry Men). Thrills abound in this high-speed suspense yarn as a determined terrorist (Bottoms) begins to turn America s amusement parks into battlefields. The tension mounts as affable safety inspector Harry Calder (Segal) attempts to track down the saboteur who has targeted the country s most popular rollercoaster and its riders for senseless destruction. The edge-ofthe-seat excitement mounts as the battle of wits between Calder and the terrorist builds to an explosive climax. This slipcased dual format edition includes both the U.S. theatrical cut and the German "uncut" version, plus other bonus features and a booklet on the production of the film.