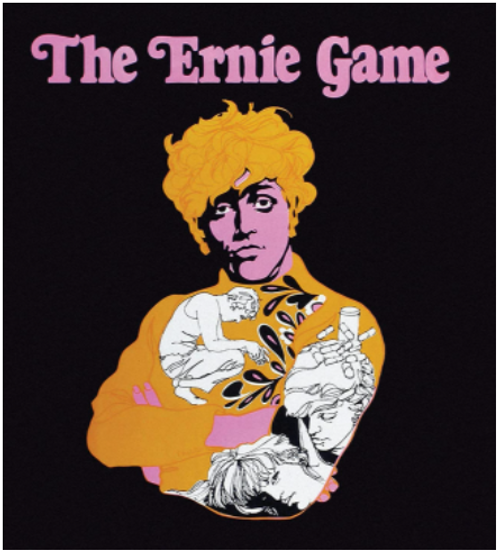 Following a mysterious stay in a psychiatric hospital, Ernie Turner (The Prisoner's Alexis Kanner) decides to pursue his destiny as a writer. Hungry for inspiration and human contact, he ventures into the vibrant streets of '60s Montreal, establishes a conflicted romance with Donna (The Apprenticeship of Duddy Kravitz's Judith Gault), and reunites with his frustrated ex, Gail (The Dead Zone's Jackie Burroughs). Unable to reconcile the pieces of his fragmented existence or make any progress on the literary front, Ernie begins a new descent into madness – with shocking results. The second feature from celebrated Canadian filmmaker Don Owen (Nobody Waved Goodbye), The Ernie Game is a penetrating, unsettling character study and an inexplicably overlooked triumph of the New Hollywood era. Predating like-minded studies of loner desperation from Midnight Cowboy to Taxi Driver in a '60s milieu comparable to Inside Llewyn Davis – complete with a musical performance by budding folkie Leonard Cohen – The Ernie Game has a distinctly Canadian vitality and desolation. This release also features four of Owen's earlier films, including Notes for a Film About Donna & Gail – which introduces two of The Ernie Game's central characters – and a remastered presentation of the landmark documentary (co-directed by Donald Brittain), Ladies and Gentlemen, Mr. Leonard Cohen.