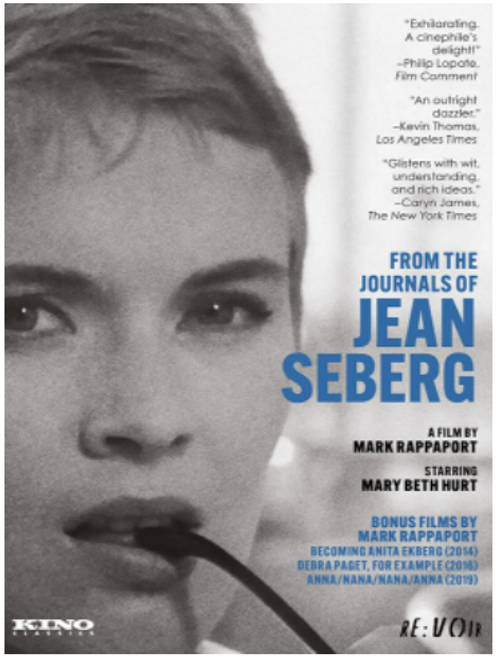 From the Journals of Jean Seberg (1995) is a profoundly illuminating exploration of Jean Seberg’s career from the brilliant filmmaker Mark Rappaport (Rock Hudson’s Home Movies). Mary Beth Hurt (The Age of Innocence) portrays Jean Seberg, who reflects on her life as it is illustrated through her work. It follows her as she is plucked from obscurity to star in Otto Preminger's Saint Joan (1957), to the critical drubbing that followed, her resurrection as a star in Godard's Breathless (1960) and through her death in 1979. From the Journals of Jean Seberg is a revelatory interrogation of film history, and women’s place in it, that examines Seberg’s involvement with the Black Panther Movement while also touching on the careers of Jane Fonda, Vanessa Redgrave, and Clint Eastwood. Kino Classics is also including some of Mark Rappaport’s other brilliant investigations into film history on this disc: Becoming Anita Ekberg (2014) reconstructs how Anita Ekberg became an internationally famous sex goddess, Debra Paget, For Example (2016) digs into how 20th Century Fox groomed Paget for stardom, while Anna/Nana/Nana/Anna (2019) is a close-up tribute to actresses from Anna Sten to Anna Karina.

Bitchin': The Sound and Fury of Rick James (region-1 DVD)