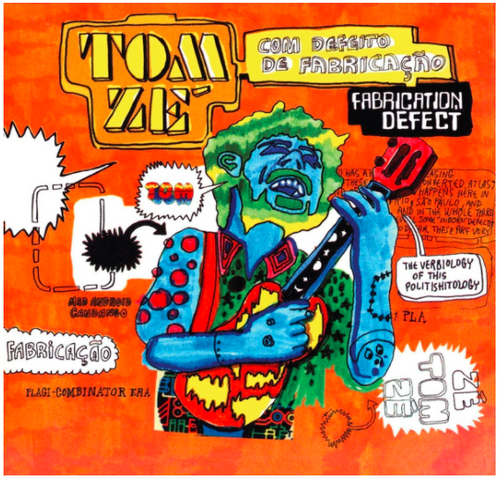 Who will place the dynamite on the head of the century? “Thank God I’ve never heard of any of that” exclaims Luaka Bop’s resident mad genius Tom Zé. Remixes, DJ culture, 16bit sampling, ambient soundscaping, multiculti cut ’n’ paste, “Beckology” — you’d think the world has finally caught up with Tom Zé’s double postmodern songcraft. After all, nearly 25 years ago, this architect in Brazil’s Tropicália movement was composing music with tape recorders triggered by doorbells. But Tom demurs. He likes to say that he never listens to music, just the work of his friends and fans who send him songs. “By not knowing,” he explains, “I have no fear of doing something similar.” And thus he remains one step ahead of the curve. On Com Defeito De Fabricação Fabrication Defect, his longawaited third missive, the man from the Brazilian hinterlands once again parries every thrust of a technological society on a rampage — but doesn’t forget the groove. With determined Brazilian bounce, arid back country funk, and generous helping of the South American psychedelia he helped create, Tom Zé’s trigonometric sambas engage the heart, the mind and the gluteal regions.

Bitchin': The Sound and Fury of Rick James (region-1 DVD)

How to Write One Song (Hardback edition)

Bringing it All Back Home (vinyl LP)