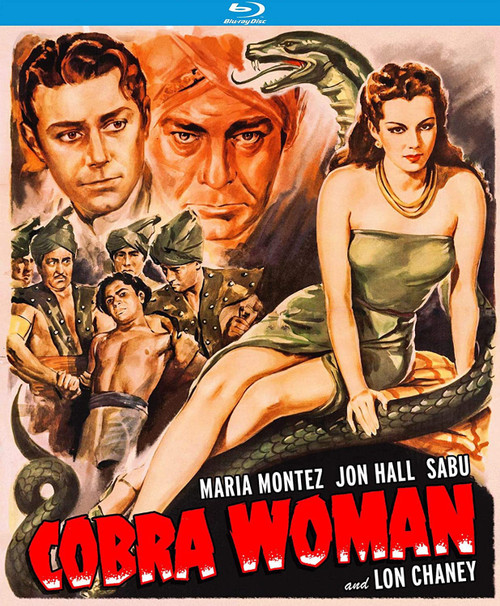 She Serpent… in the Garden of Love! From Robert Siodmak, the legendary director of Phantom Lady, The Spiral Staircase, The Killers, Cry of the City and The Crimson Pirate comes this romantic action-adventure starring Maria Montez and Jon Hall, the stars of Arabian Nights, White Savage, Ali Baba and the Forty Thieves, Gypsy Wildcat and Sudan. After Ramu (Hall) discovers that his fiancée Tollea (Montez) has been kidnapped by a lost tribe and taken to a Pacific isle, he and his friend Kado (Sabu, The Thief of Bagdad, Jungle Book) set out across the seas to find her. They soon discover that the island paradise is ruled by Tollea’s evil twin Naja, the Cobra Woman, who commands all strangers to be killed on arrival. Not only does Naja have designs on her new prisoner Ramu, but she also desires to eliminate any competition from her benevolent sister. Discover all the forbidden wonders and dangers of the tropics in this beautifully filmed Technicolor adventure! The great Lon Chaney Jr. (The Wolf Man, The Black Sleep, Witchcraft) co-stars as Hava. This blu-ray edition also features Australia's very own Phillipa Barry on commentary!